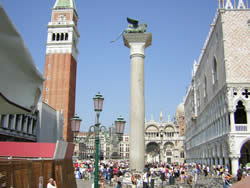 The National Archaeological Museum of Venice in the Saint Mark’s Square hosts an important collection of ancient sculptures, including some major original Greek works. It contains also bronze statues, potteries, jewels and coins, as well as the archaeological collection left there by the Correr Museum including ancient Egyptian and Assyrian-Babylonian antiquities. The Museum consists in a collection of works collected by eminent Venetian families since the 16th century. All began in 1523 with the legacy of Cardinal Domenico Grimani; on his death he bequeathed to the Signoria most of his collection of ancient objects.

By continuing to use the site, you agree to the use of cookies. more information